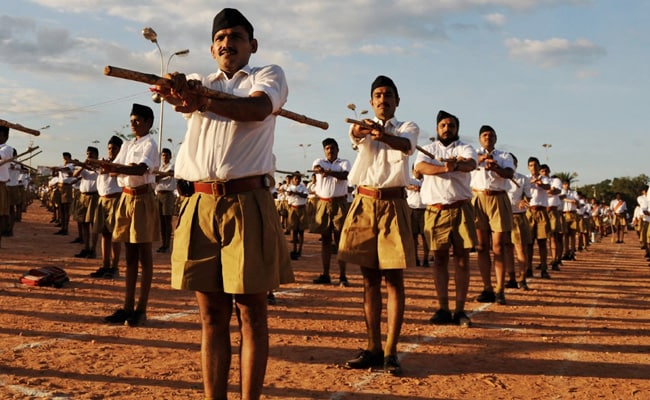 A Congress submit that includes a burning pair of Khaki shorts in an obvious jab on the Rashtriya Swayamsevak Sangh (RSS), the ideological mentor of the BJP, has triggered a brand new conflict on Twitter within the backdrop of Rahul Gandhi’s nationwide “Bharat Jodo” march.

Using the hashtag #BharatJodoYatra, the Congress wrote in its tweet this morning: “To free the country from shackles of hate and undo the damage done by BJP-RSS. Step-by-step, we will reach our goal.”

The picture of the burning Khaki shorts was captioned: “145 days more to go.”

To free the nation from shackles of hate and undo the injury finished by BJP-RSS.

Step by step, we are going to attain our purpose.#BharatJodoYatra 🇮🇳 pic.twitter.com/MuoDZuCHJ2

The tweet didn’t identify the RSS although it clearly pointed on the organisation’s trademark khaki shorts.

Among the primary to react was BJP MP Tejasvi Surya, who stated the tweet was typical of the Congress “ecosystem”.

“This picture is symbolic of Congress politics – of lighting fires in the country. Fires they lit in the past has burnt them in most of India. The remaining embers in Rajasthan and Chhattisgarh will also be reduced to ashes very soon,” Mr Surya tweeted.

They have once more given their ecosystem a name for violence.

With Rahul Gandhi ‘combating towards Indian State’, Congress ceases to be political get together with religion in constitutional means. https://t.co/28qbFvKkbI

“Congress fire burnt Delhi in 1984. Its ecosystem burnt alive 59 karsevaks in Godhra in 2002. They have again given their ecosystem a call for violence.

With Rahul Gandhi ‘fighting against Indian State’, Congress ceases to be political party with faith in constitutional means.”

“This tweet is nothing but instigating people for violence, done on the Gandhi family’s bidding,” Mr Patra stated.

The Congress defended its tweet and stated the BJP and RSS had been “not used to” the Congress being aggressive.

“Those who stoke fires of hatred, those who stoke the fire of bigotry and prejudice, must be prepared to take some things back in same coin,” stated senior Congress chief Jairam Ramesh.

“If I were to enumerate the manner in which the BJP and its surrogates have fanned hatred, prejudice, lies and falsehood…The RSS and the BJP are not used to an aggressive response from the Congress. When the Congress gets aggressive, they back off,” Mr Ramesh stated.

Rahul Gandhi launched his nationwide, 150 km “Bharat Jodo Yatra” or footmarch final week. The Congress chief has stated his marketing campaign is aimed toward uniting a nation divided by the ideology of hate.