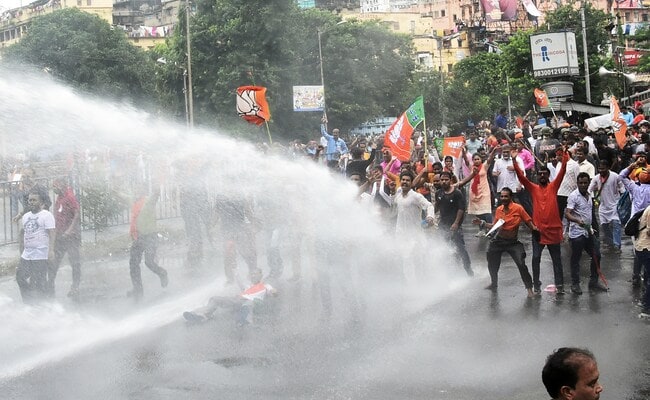 BJP staff clashed with the police throughout their march to Bengal secretariat “Nabanna”.

Trinamool Congress’s Sougata Roy at this time took the BJP head on over their cost of “dictatorship” towards Mamata Banerjee following the large violence throughout yesterday’s BJP protests in Kolkata and close by Howrah towards the alleged corruption by the Mamata Banerjee authorities. Suvendu Adhikari, Ms Banerjee’s aide-turned-chief rival, had accused her of operating a dictatorship very similar to North Korea.

Declaring that the Bengal police have proven “tremendous restraint” in face of “extreme provocation” the Trinamool MP mentioned, “Where did Mamata Banerjee show dictatorship? The programme (BJP rally) has been continuing since noon. The police have not fired on anybody”.

Claiming that the intention of the BJP was to impress the police so that they resort to firing, he mentioned, “The BJP workers have thrown stones and bricks at random. They have injured several policemen including IPS officers. They have broken cars in Burrabazar area… Very few BJP people have been injured. In every tv screen you can see BJP workers throwing stones”.

Parts of Kolkata and Howrah had become battle zone yesterday because the BJP staff clashed with the police throughout their march to the state secretariat “Nabanna”. Visuals from town confirmed pitched battles on some essential roads and lanes, with flag waving BJP supporters taking over the police with bamboo poles. Stones have been thrown and a police automobile was set on fireplace. The police tried to regulate the mob with batons, water cannons and tear fuel.

Injured protesters have been seen mendacity on the highway. Several policemen, together with one IPS officer, additionally sustained accidents, Mr Roy mentioned.

The police, he mentioned, didn’t want to injure individuals. “Do you remember 25 July 1993? Thirteen Trinamool Congress workers were killed in police firing in the city of Calcutta,” he instructed NDTV in an unique interview, pointing to what’s now marked by the celebration as Martyr’s Day. “Have the police fired even one round today? If this is not democracy, what is?” he added.

The BJP has alleged using “disproportionate force” on a part of the state police and claimed they’d the mandate from the state authorities to take action.

Union Minister Subhas Sarkar had accused the Bengal police of throwing stones on the crowd. “The police provoked the men to attack. The police provoked a peaceful demonstration. The common people came. They were angry,” he had instructed NDTV, insisting that he was not justifying violence.

“Chief Minister Mamata Banerjee does not have the support of her people and so she is enforcing dictatorship, similar to North Korea, in Bengal. The police will have to pay for what it is doing. The BJP is coming,” alleged Leader of the Opposition Suvendu Adhikari, who was detained by the police together with different senior leaders of the celebration.

“The BJP did a clever thing,” Mr Roy mentioned. “Their main leader Suvendu Adhikari sheepishly courted arrest. Went away so he didn’t have to face the consequences. Their state president Sukanto Bhattacharya sat on a dharna and got arrested. Their idea was that leaders will get arrested and then workers will create mayhem. Unfortunately, they did not have so many workers nor did they have trained workers,” Mr Roy added.

Regarding BJP claims that the turnout of the protest at this time was an indicator of the individuals’s anger towards the Trinamool Congress, Mr Roy mentioned it was a “fake crowd”.

The individuals haven’t come out, he mentioned. Those seen within the protest have been state BJP staff, lots of whom have been paid Rs 1,200 every to come back. The BJP spent Rs 3 crore to pay them, one other Rs 2 crore to convey them in buses. “Even if you give the BJP injection they will not become a force,” he added.