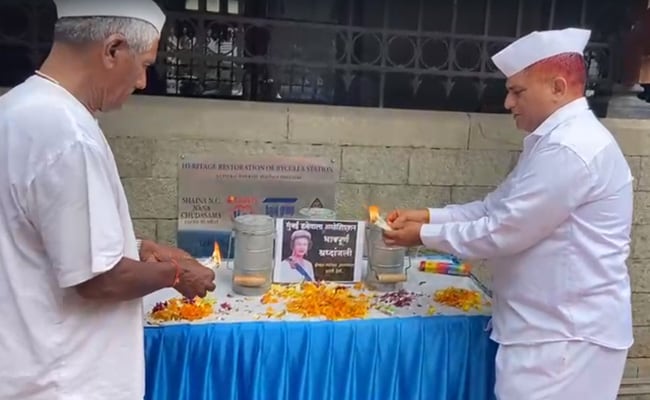 Mumbai Dabbawala Association stated in a press release, “We share the grief of the family of King Charles”

As the world pays its tributes to Queen Elizabeth II, who died final Thursday, Mumbai’s meals supply individuals, popularly often known as dabbawalas, additionally joined in to pay their homage to the British monarch. Mumbai Dabbawala Association paid a heartfelt tribute to Queen Elizabeth II at Byculla railway station right now, Subhash Talekar, the president of Mumbai Dabbawala Association, stated in a press release. “We share the grief of the family of King Charles,” the assertion added.

Queen Elizabeth II, the longest-serving monarch of the United Kingdom, died on the Balmoral Castle in Scotland on the age of 96.

“We are very sad to hear about the death of Queen Elizabeth II and all dabbawalas pray that her soul rests in peace,” Mr Talekar had stated earlier as information in regards to the British monarch’s demise broke.

Raghunath Medge, an workplace bearer with the Nutan Mumbai Tiffin Box Suppliers Association, had stated that he spoke to the Queen and had breakfast together with her twice when he and Sopan Mare, one other dabbawala from Mumbai, had been particular visitors on the royal wedding ceremony of Prince Charles and Camilla Parker-Bowles in April 2005.

The dabbawalas had their first brush with British royalty in November 2003, when Prince Charles met them at Churchgate railway station and was extremely impressed by their work tradition. “The prince was mesmerised, learning about the way we work and heard us with rapt attention,” Mr Medge recalled. The affiliation had despatched a sari for Camilla and a Maharashtrian turban for Prince Charles for his or her wedding ceremony, he stated.

“Prince Charles accepted the gift and extended a special invitation to the association to attend his wedding. He even arranged for the air fare for two people from the association and took care of the other expenses as well,” Mr Medge added.

“We had breakfast twice with Queen Elizabeth and other members of the royal family. She was very humble,” he stated. “Although there was this language barrier, Padmini Devi, who hails from a royal family in Rajasthan and who was an invitee at the wedding, helped with the translations during our conversations with the queen,” Mr Medge stated. He added: “Our first breakfast with the Queen was at Buckingham Palace, while the second breakfast was at Windsor Castle, which was the venue for the royal wedding.”