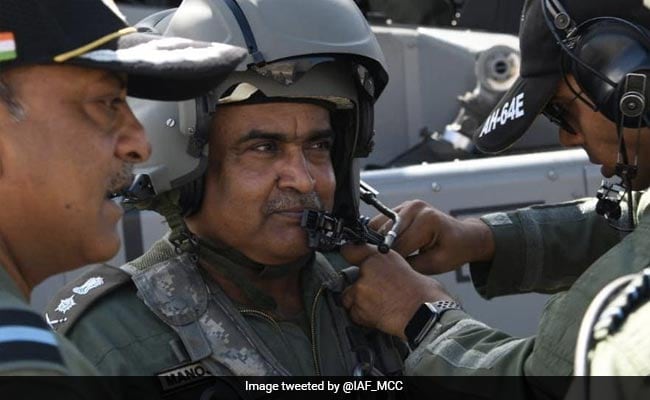 The military chief was briefed about capabilities and roles of the Apache helicopter, the IAF stated.

Army chief General Manoj Pande flew in an Apache assault helicopter of the Indian Air Force (IAF) within the Ladakh sector on Sunday and was additionally briefed about its capabilities and roles, the IAF stated.

General Pande carried out a complete evaluation of the general safety scenario in jap Ladakh on Saturday, two days after the Indian and Chinese militaries started disengaging from Patrolling Point 15 within the Gogra-Hotsprings space within the area.

The Army on Sunday tweeted about his go to to the headquarters of the Leh-based Fire and Fury Corps.

“General Manoj Pande #COAS visited Headquarters@firefurycorps and reviewed the operational preparedness. #COAS also interacted with the officers and staff at @firefurycorps and complimented them for their professionalism and dedication to duty,” it stated in a tweet.

Commander of the Fire and Fury Corps, Lieutenant General Anindya Sengupta and different senior officers apprised Gen. Pande in regards to the general safety scenario, together with the continued disengagement course of in Patrolling Point 15, folks aware of the Army chief’s go to had stated on Saturday.

The Army on Saturday stated Gen. Pande witnessed the Parvat Prahar train, in addition to interacting with the officers and troops deployed within the area. The train featured a show of operational capabilities by artillery weapons and different key weapon methods.

Meanwhile, the IAF tweeted: “General Manoj Pande, #COAS flew in an #IAF Apache attack helicopter in the Ladakh sector, today. COAS was familiarised with the flying characteristics of the platform and briefed about its capabilities and roles. #Jointmanship #Integration #StrongerTogether.”

General Manoj Pande, #COAS flew in an #IAF Apache assault helicopter within the Ladakh sector, at this time.

COAS was familiarised with the flying traits of the platform and briefed about its capabilities and roles.#Jointmanship#Integration#StrongerTogetherpic.twitter.com/NgHMC5CD3l

Gen. Pande’s go to assumes significance because the Indian and Chinese armies introduced on Thursday that they’d begun to disengage from Patrolling Point 15 within the Gogra-Hotsprings space of jap Ladakh, marking a major ahead motion within the stalled course of to drag out troops from the remaining friction factors within the area, the place the 2 sides have been locked in a standoff for greater than two years.

The jap Ladakh border standoff erupted on May 5, 2020, following a violent conflict within the Pangong lake areas. Both sides regularly enhanced their deployment by dashing in tens of 1000’s of troopers in addition to heavy weaponry.

Chief of Air Staff Air Chief Marshal V R Chaudhari had, in the course of the 89th Air Force Day celebrations on the Hindon airbase final 12 months, stated the IAF’s immediate actions in response to the developments in jap Ladakh in 2020 have been a testomony to its fight readiness and that its capability-enhancement programme was geared toward attaining the specified outcomes “swiftly and decisively” throughout domains.

Referring to the tri-services integration, Air Chief Marshal Chaudhari had additionally “assured” the nation of the IAF’s “unwavering commitment” in the direction of delivering joint functionality and producing built-in response choices as part of a coherent nationwide technique.